PlanEAT, Nothing Changes the Planet as much as the way we EAT

PLANEAT is the story of three men’s life-long search for a diet, which is good for our health, good for the environment and good for the future of the planet. With an additional cast of pioneering chefs and some of the best cooking you have ever seen, the scientists and doctors in the film present a convincing case for the West to re-examine its love affair with meat and dairy. The film features the ground-breaking work of Dr. T Colin Campbell in China exploring the link between diet and disease, Dr. Caldwell Esselstyn’s use of diet to treat heart disease patients, and Professor Gidon Eshel’s investigations into how our food choices contribute to global warming, land use and oceanic deadzones.

VegNews 2012 Veggie Awards – Our 11th annual list of the very best of all things vegan is finally here! Read on for this year’s reader and editor’s picks for today’s hottest vegan people, places, and products.

It’s time to celebrate—the 2012 Veggie Awards are here! Months of planning, research, trend-spotting, interviews, and of course, a full month of reader voting—totaling more than 1 million votes—have culminated in the following list of this year’s brightest stars. Enjoy!

If you’re anything like me, the “C” word leaves you trembling. But today there is very good news to report: Research suggests you can improve your odds of never getting cancer and/or improve your chances of recovering from it. Not with a drug or surgery, although those methods might be quite effective. This is all about the power on your plate, and it’s seriously powerful.

A 2012 analysis of all the best studies done to date concluded vegetarians have significantly lower cancer rates. For example, the largest forward-looking study on diet and cancer ever performed concluded that “the incidence of all cancers combined is lower among vegetarians.”

That’s good news, yes. But what if we’re looking for great news? If vegetarians fare so much better than meat-eaters, what about vegans? Is that an even better way to eat? We didn’t know for sure until now.

A new study just out of Loma Linda University funded by the National Cancer Institute reported that vegans have lower rates of cancer than both meat-eaters and vegetarians. Vegan women, for example, had 34 percent lower rates of female-specific cancers such as breast, cervical, and ovarian cancer. And this was compared to a group of healthy omnivores who ate substantially less meat than the general population (two servings a week or more), as well as after controlling for non-dietary factors such as smoking, alcohol, and a family history of cancer.

Congratulations to Barack Obama on his second-term victory. I have waited until this moment—a time when no future elections face him—to tell you that our President has been preparing his whole life to understand and implement a healthy diet for our ailing nation. I believe this is one of his greatest missions. The American people are fat and sick, and over-tested and over-treated. Unimpeded by political consequences, our 44th President no longer must bend to the pressures of the pharmaceutical, medical, and food industries. Because of his understanding of the truth and his flexibility, he is now in a position to support our country in becoming strong, productive, and healthy again.

My Encounter with Barack Obama

Barack Obama was introduced to the McDougall Program as a teenager during his years at Punahou High School (1975 to 1979). At the invitation of Brad Yates, the school’s health education teacher, I spoke annually at this top private school in Honolulu, Hawaii. After one of my lectures, a group of four young men sitting in the front row of the auditorium approached me. One of the students was introduced to me as Barry Obama. As a young black man he stood out from the rest of the white and Asian student body. Hopefully, I made a lasting impression on his thinking.

http://www.drmcdougall.com/misc/2012nl/nov/obama.htm  Click here for the rest of the story

The science is clear. The results are unmistakable.

Change your diet and dramatically reduce the risk of cancer, diabetes, heart disease and obesity. 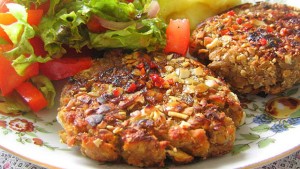 From Frances Talarico, VEG Thunder Bay – Whenever I tell someone I am Vegan, I always get a multitude of questions. Being Vegan isn’t difficult. There are many myths out there which can become barriers to making that choice. Many myths depict the choice to be Vegan as unappealing.

So I will explore the most common myths about veganism and try to set them straight!

1. Veganism is a diet.
Veganism is not a diet. The choice to be Vegan is a choice made to live a compassionate lifestyle. I have always told people who are contemplating going Vegan, that the most important reason to do it is to live the value of compassion. Once you go Vegan for that reason, then it is very difficult to go back to a lifestyle which will cause suffering for billions of living beings in this world. Once you see what happens in a factory farm you will not crave those chicken wings!

2. Vegans don’t get enough protein or calcium
For most people, meat = protein, and milk = calcium. But cows are vegan. Horses are vegan. Hippos are vegan. They eat plant-based diets and grow strong muscles without meat and dairy in their diets. You are thinking, ‘Yeah, that’s right. How can that be?’ This is because protein and calcium are found in plant foods. Still can’t give up that glass of milk that you have been told to drink all your life? Think of all the cultures that never consume dairy and don’t suffer from calcium deficiencies. Far from it…they have the lowest rates of osteoporosis in the world.

To see the myths 3 thru 10 click the link below: